Donald has always had a passion for the health and wellness industry. Originally from Medicine Hat, Alberta, he moved to Edmonton in 2008 where he received two diplomas – one in Clinical Nutrition, and the other in a Bachelor of Arts.

Shortly after graduating, Donald moved to Calgary where he landed a job as a Nutraceutical Sales Representative. “I worked in that role for about six-and-a-half years selling high-end vitamins, minerals and other products to various retail stores,” he says.

But a tragic accident changed the trajectory of Donald’s life. “I had a brain aneurism,” he says. “I was in the hospital for a year-and-a-half and couldn’t walk.”

During his time at the hospital, Donald received many treatments, including a rehabilitation specialist and massage therapist who came to provide therapy daily. “I would see her five days a week, and she told me when I left the hospital I would be out of the wheelchair walking.”

The therapist was true to her word. Within three months Donald was out of his wheelchair and walking with the assistance of a walker. “Then I went from the walker to a cane, and then from using a cane to just my own two feet within a year.”

Donald credits his ability to walk again to his massage therapist, who inspired him to pursue the career on his own.

“Once I got out of the hospital I had a dream to be a massage therapist and I found out about MaKami’s 3,000 hour program from a friend,” says Donald, who took a tour and was impressed with what he saw at the school.

“I enrolled immediately because I was so outstandingly thrilled with what MaKami can do for people with disabilities. As a result of my aneurism, I have a speech impediment, learning disabilities and cognitive impairments, and my eyesight is also not the best. So when I found out that MaKami would help support me through those challenges, I signed up right away.”

Since enrolling, Donald says he has not been at all disappointed with those support services.

“They have assisted me quite a bit with challenges and worked with me 100% They have not dropped ball for one second. I get tutoring 4-5 days a week and it’s unlimited tutoring. As soon as you start class they actually tell you to get tutoring. They send emails encouraging you to get tutoring, and it’s a very successful program. I’m now almost an A student despite my challenges because of the tutoring offered through the school’s Student Success Centre (SSC) and I’m so incredibly grateful for that.”

He also appreciates the support the school gave him in his practical placement with Parkview Massage + Wellness, which has turned into a guaranteed job position. “I almost have full-time clientele as a student. It’s an amazing place to work I couldn’t ask for anything better.”

And the school’s 3000-hour program will also help him meet his long-term goal of becoming a massage therapist rehabilitation specialist working with people with brain injuries – just like the therapist who helped get him literally back on his feet.

“MaKami is the only college offering a 3000-hour massage therapy program. That will enable me to get a rehabilitation diploma and meet my ultimate goal.”

“My life now is full-time plus. I go to school, do my practicum, do tutoring in the SSC every day and have a part-time job. It’s easily a 60-hour week so I’m a very busy person, but also a very happy person because I have a goal to attain, and my goal is being attained because of MaKami and all they have to offer me.” 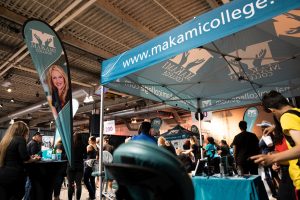 Get the MaKami Experience at the 2022 Calgary Stampede

MaKami College will be back at the Calgary Stampede in 2022, offering free massages and the MaKami Experience in the BMO Centre. 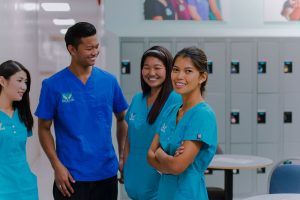 Our next English Conversation Club meeting is happening at 12pm on June 1 at our Calgary SW Campu. RSVP now!